"The law locks up the man or woman, Who steals the goose from off the common.

But leaves the greater villain loose,

Who steals the common from the goose…”

‘The tragedy of the commons’- it is a phrase many will be familiar with. Drawn from the title of a now infamous academic paper by ecologist Garrett Hardin, it is regularly invoked by advocates of no-holds-barred neoliberal capitalism to describe why we need private property and the free market to avoid ecological and social collapse.

If left to govern things collectively ‘in common’, Hardin’s argument goes, people, assumed to be inherently selfish, will exploit ecosystems and each other, leading to collapse.

As Hardin put it (very unscientifically), "freedom in a commons brings ruin to all."

But the thing is, Hardin was wrong about the commons. He was also wrong about the benefits of privatisation and free market capitalism, which, by facilitating the enclosure, commodification and destruction of commons (like the atmosphere, the oceans or a patch of rainforest, for example), are driving the wider destruction of our planet and growing inequality.

Thanks to the tireless work of scholars like Elinor Ostrom, who have evidenced and described the fairness and wealth of well-managed commons around the world, we know commons and forms of collective management are not bound to fail at all.

In fact, the Commons could be a big part of our salvation.

Commons take many forms, ranging from community land trusts for eco-friendly farming and ‘platform cooperatives’ as alternatives to Uber and Airbnb, to indigenous governance systems and open-source design and manufacturing.

But despite superficial differences, they do have several key things in common. Each commons is made up of three main ingredients, which can broadly be described as:

“(A Commons) is a resource plus a defined community and the protocols, values and norms devised by the community to manage its resources… (it) arises whenever a given community decides it wishes to manage a resource in a collective manner, with special regard for equitable access, use and sustainability.”

Right now, says David, we need many more commons to ‘arise’, helping to dismantle our diseased economy and align our governance with ecological realities and the needs of diverse societies before it’s too late.

“Many resources urgently need to be managed as commons, such as the atmosphere, oceans, genetic knowledge and biodiversity”, he says.

In their new book entitled Free, Fair and Alive- The Insurgent Power of the Commons, David Bollier and co-author Silke Helfrich, show how, around the world, commons are (re)emerging as a paradigm and set of practices that emphasise collective stewardship of shared wealth and the interconnectedness that makes life on Earth possible.

In London on 17th September, David Bollier will be in London for the UK-launch of this new book, at an event hosted by The Gaia Foundation.

In a talk given at the launch, David will explore the themes of the book, which builds on the work of Elinor Ostrom to show how, when structured through commons, social collaboration can be highly generative, fair, and inclusive.

“Countless commons around the world point to post-capitalist possibilities that will be essential as current market/state systems spiral into deeper dysfunction”, says David.

Join us to find out how and why the commons are the seed-form for a new society- a society in which we see ourselves for what we are, ‘nested-I’s’ interdependent on the living world and each other, and act accordingly. By The Gaia Foundation 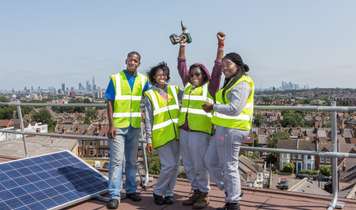