It is time to wake up and freak the fuck out. BP and the American government want you to sit tight and imagine that this environmental catastrophe is being fixed by responsible people. Don’t worry. Keep calm and carry on. Do not adjust your television. Go back to sleep. 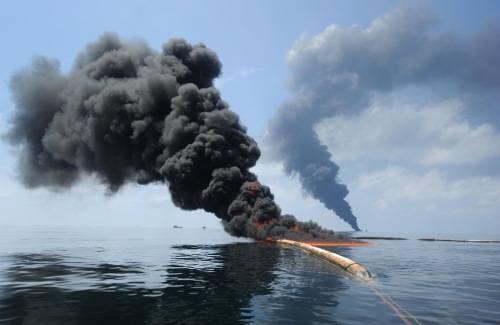 It is time to wake up and freak the fuck out. BP and the American government want you to sit tight and imagine that this environmental catastrophe is being fixed by responsible people. Don’t worry. Keep calm and carry on. Do not adjust your television. Go back to sleep.The truth is that we are being lied to on many levels and responsibility was flushed out to sea a long time ago along with our grandchildren’s destiny. The reality is that this is an unprecedented rupture of one of the planets most pressurized wells. An engineer with 25 years of experience writes: 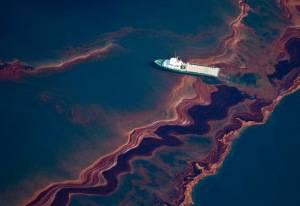 Aerial view of the oil leaked from the Deepwater Horizon wellhead, May 6, 2010. (REUTERS/Daniel Beltra)

They go out where the ocean is 5,000 feet deep and drill another 30,000 feet into the crust of the earth. This it right on the edge of what human technology can do. Well, this time they hit a pocket of oil at such high pressure that it burst all of their safety valves all the way up to the drilling rig and then caused the rig to explode and sink. Take a moment to grasp the import of that. The pressure behind this oil is so high that it destroyed the maximum effort of human science to contain it. Now they’ve got a hole in the ocean floor, 5,000 feet down with a wrecked oil drilling rig spewing 200,000 gallons of oil a day into the ocean. The only piece of human technology that might address this is a nuclear bomb. 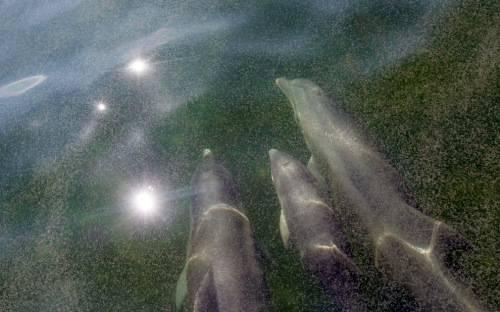 A pod of Bottlenose dolphins swim under the oily water, Louisiana, May 6, 2010. (AP Photo/Alex Brandon)

Obama says he is going to aggressively pursue the costs of the oil leak; as if any amount of money can compensate for dolphins dieing slowly in our toxic shit, dugongs drowning in sludge or whole coral reef systems being eradicated. However, the horrendous truth that we ignore at our peril is that this vast aberration is just the dirty boot of an out of control sociopathic giant that is stomping across our planet leaving nothing but death and devastation in its wake. 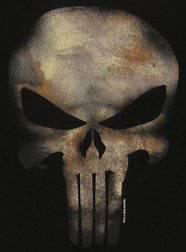 Humanity's dark side is out of control

The psychotic beast that terrorizes nature and endangers our grandchildren’s existence is growing more powerful every day. He assaults every known ecosystem on the planet. He knows no mercy. He thrives on young plump flesh and howls with glee as he snuffs out of existence the billions of humans that may now never live. Look in the mirror, nice and close and you might glimpse him staring back at you out of the dark heart of your beady little eye. We might wish this evil behemoth was extraterrestrial. This would be an easier foe to confront. Indeed it might even lead to the long awaited unification of the human species. The truth is far harder to accept. We have created this monster. Indeed it is a manifestation of our ugliest characteristics; our greed and vanity.

Of the world’s largest 150 economic entities, 95 are corporations. Wal-Mart, BP, Exxon Mobil, and Royal Dutch/Shell Group all rank in the 25 largest entities in the world, above countries that include Indonesia, Saudi Arabia and Norway.

The corporate giants we have created, as well as being bigger then nations, are far more focused and efficient in their endeavours. Whereas nations are composed of millions of people who are all doing different things a corporation is structured entirely around its modus operandi. Most corporations have linear business models. They extract natural resources, convert them into products and sell them to consumers who eventually discard the product as harmful waste back into nature. A Corporation’s profits (and power) increase with the increasing efficiency and scale with which they convert natural capital (forests, mountains, fisheries) into human capital (cars, cities, cloths). So what actually are these enormous entities that are altering the composition of the oceans, the atmosphere and even the building blocks of life itself? The Corporation is a bizarre, ancient construct. In medieval times entities like churches and local governments were ‘incorporated’ so that they could survive longer than any particular members allowing them to exist in perpetuity. Despite not being natural persons, corporations are recognized by the law to have rights and responsibilities like actual people. A key feature of a corporation is limited liability which enables corporations to socialize their costs (e.g. pollution) whilst privatizing their profits for the benefit of shareholders. 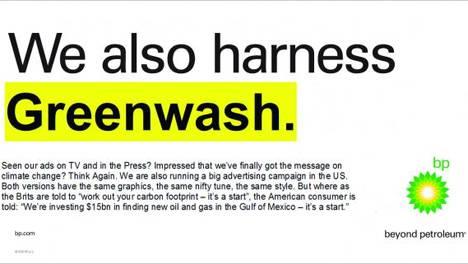 Early companies used rivers to remove waste from factories. In developed countries this came under control when people downstream were harmed by the pollution and brought a case to court. However, to this day, no organism, ecosystem or indeed, nature as a whole, has ever been afforded a legal right, despite their role in sustaining civilization. This is a new and important front for environmentalists (for example: Wild Law, The Universal Declaration of Planetary Rights & Earth Jurisprudence). 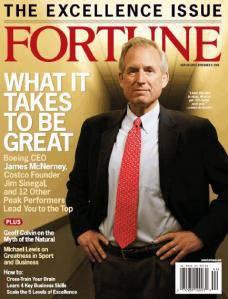 Critiques of the modern corporation highlight its pathological self-interest, amorality, and voracious appetite for more. Historically corporations have cut deals with any style of government – from Nazi Germany to despotic states today. They influence policy for their own interest despite the social cost for example by consistently lobbying for weak environmental policy. They also concentrate unprecedented wealth in the hands of men who are, by and large, greedy, immoral and myopic.

The exceptional film The Corporation evaluates the contemporary corporation’s behaviour towards society and the world at large as a psychiatrist might evaluate an ordinary person. The film’s assessment is effected via Robert Hare, a University of British Columbia psychology professor and a consultant to the FBI who compares the profile of the contemporary profitable business to that of a clinically-diagnosed psychopath.

The psychopaths may have run amok unchecked were it not for a new crime of a scale never before seen. The crime, like the corporations committing it, is bigger than anything ever achieved before by man, thus requiring a new word; Ecocide: the extensive destruction, damage to or loss of ecosystem(s) of a given territory, whether by human agency or by other causes, to such an extent that peaceful enjoyment by the inhabitants of that territory has been severely diminished. A campaign for the United Nations to accept “ecocide” as a fifth “crime against peace”, which could be tried at the International Criminal Court (ICC), alongside genocide and crimes against humanity – was being launched in the UK this year by environmental barrister Polly Higgins. Ecocide in the Niger Delta; guess who's behind it...

Ecocide is now happening all around the world. 10 ecocide hotspots include: Texaco Chevron dumping roughly 18.5 billion gallons gallons of crude oil and toxic waste waters into the Amazonian jungle over two decades; Vedanta Resources , a British company, planning to dig an open-pit bauxite mine in the forest’s of the ’sacred’ Niyamgiri mountains in India; Royal Dutch Shell in the Alberta Tar Sands referred to as the most damaging project on the planet which of course will now be overtaken by BP’s holocaust in the gulf of Mexico.

It is time for the green movement, civil society and any independent minded beings out there to wake up see what’s happening and take the fight to the source. Humanity’s survival depends on reining in the out of control behemoth that is disemboweling Mother Nature right in front of our unseeing eyes. The psychotic corporate machine is literally moving mountains, poisoning the sea, changing the atmosphere and making the planet in inhospitable. It must be stopped.

Photos from the gulf: http://www.boston.com/bigpicture/2010/05/disaster_unfolds_slowly_in_the.html 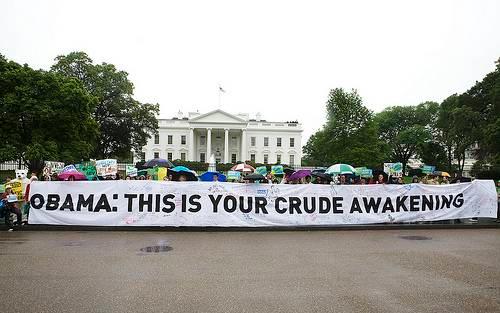 Winner of the Film4Climate competition, spoken word artist Prince Ea makes a powerful case for protecting the planet and challenges the human race to create a sustainable future 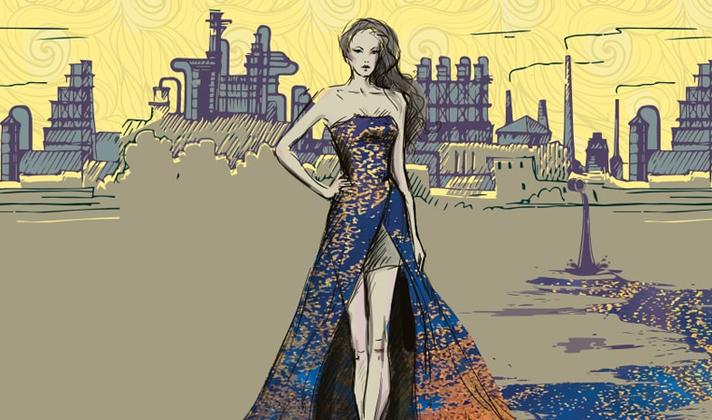 H&M and Zara are linked to devastating pollution in Asia