As nature collapses around us, surely political priorities have to change? It’s the ecology, stupid If we want to survive the ecocrisis with democracy intact, we need a strong Green Right.

In 1992 Bill Clinton famously captured the zeitgeist with his slogan “It’s the economy, stupid.” 2019 is transforming the political landscape, with civil disobedience campaigns widely supported by the public and David Attenborough’s offerings - Sky’s Our Planet and BBC’s Climate Change: The Facts - spelling out the trouble we’re in to many who had remained blissfully ignorant. Major biodiversity reports have delivered further existential shocks concerning insect and wildlife populations. How long will it be till politicians realise there’s a new key to electoral success: “It’s the ecology, stupid.”?

In a healthy democracy, power changes hands on a regular basis and often involves compromise. That’s why the emerging schism between left and right wing responses to the crisis is so worrying. Climate Outreach works across the political spectrum to engage civil groups. Co-founder George Marshall says, “We need a healthy political competition to offer visions of a truly sustainable economy.”

Around the world, parties pitching themselves as left of centre have broadly acknowledged the issues and have begun to respond with policies – albeit inadequately. Red-Green has practically become a movement in its own right. So where’s Blue-Green when you need it? Rightwing responses have been hamstrung by empty virtue signalling, tokenism, and denial both direct and indirect. Marshall says, “presentation of the climate crisis has been dominated by people the right don’t trust, polarising the debate”. In particular, he says the right wing press have been “reprehensible,” promoting irresponsible voices and confusing readers. He adds that while it’s everyone’s planet, responses on the right reflect how long voters are going to be on it: young people want climate change to be addressed; the old guard are more likely to be duped by deniers.

For many on the left, the ecocrisis is an opportunity to do away with capitalism – and a good case can be made. But capitalism can be a slippery word. In the 19th century, an academic tome proposing a major economic shake-up became a best-seller influencing intellectuals around the world. It had nothing to do with Karl Marx. Progress and Poverty by Henry George was an attempt to include nature in the economy’s accounts. Georgism is arguably more of a departure from traditional capitalism than post-war British socialism, yet Georgism is considered firmly in the capitalist camp. Recent Georgist incarnations suggest adopting a Universal Basic Income, an idea that appealed to Churchill. The real difference is how language is used to appeal to a target audience. Conservative history offers further encouragement. 19th century conservative intellectual John Ruskin said, “There is no wealth but life,” and in the wake of Rachel Carson’s 1962 book Silent Spring, President Nixon set up the Environmental Protection Agency. In 2000, Natural Capitalism by American ecoentrepreneur Paul Hawken suggested how small businesses could drive the innovations needed to restore nature. Indeed, Conservatives love to point out that Margaret Thatcher was the first statesperson to warn world leaders about global warming.

The ideas and instincts are there to be applied. What’s with the delay adopting policies? As Marshall says of the right, “Why on Earth have you left the most important issue of our generation to people you don’t trust?”

One problem is that the right tends to maintain a blind trust in the wisdom of markets. The EU’s Emissions Trading Scheme, for instance, relies on the idea that if a carbon emissions market is established, emissions will fall. In 2009 The Ecologist magazine held an essay competition to answer the question: How do you price the extra tonne of carbon that, once burned, tips the balance and triggers potentially catastrophic, irreversible global warming? - a clever way of demonstrating that there are limits to the kinds of answers markets can provide. However, markets remain very good at some things, and if the left abandons market thinking altogether, a space is likely to open up to re-evaluate them.

Rightwing politics is also suspicious of government telling us how to run our lives without knowing the crucial details of our circumstances or motivations. In his excellent book on climate psychology, George Marshall shows that neoliberal governments’ initial responses to the climate crisis were to inform individuals of their responsibility to make different choices – buy different products and recycle more. The problem is that being on the receiving end of these messages is remarkably disempowering: I choose the beans that haven’t been flown in from Kenya only when I become aware that most of them have, and that no-one else cares. The result is not reduced national emissions, it’s Extinction Rebellion.

Yet in the private sector, the right apparently has no trouble with collective action on a grand scale. Transnational corporations write laws to suit their own interests, and their armies of lobbyists are invited to the high tables of climate diplomacy to shape the destinies of billions of people.

Which brings us to another entanglement. Right wing parties around the world have spent decades nurturing billionaire networks that facilitate the flow of funds into their coffers. For some time, centre left parties felt they couldn’t compete without selling out – Bill Clinton’s strategy worked for him and inspired New Labour, but it put voters off Hilary in 2016, after Obama’s grassroots-funded 2008 campaign showed another way. At a time when fundamental change is desired, the worst people to get in bed with are those who won big in the fossil-fueled system.

Many on the right have already understood that what defined the centreground from the 1980s until recently is turning into a political no-mans-land. The instinct of influencers so far has been to follow some voters into far-right territory by scapegoating migrants and making light of plain facts. The former editor of The Ecologist magazine, Zac Goldsmith, had an opportunity in 2016 to pitch a green right argument to Londoners in the mayoral election, but his racist innuendoes drowned out any such attempt.

There is another way. Voters – especially young ones – want change, and they also want a secure future. Why shouldn’t a strong, localist green right emerge with new, politically attractive offerings such as a Universal Basic Income? Why couldn’t its campaigns be funded without recourse to the oligarchs who got us in this mess?

The left have a clear head start in the new political environment, but may run into their own troubles if they remain sold on limitless economic growth based on industrialisation. The right are only just starting to show signs of considering a serious, proportionate response, and in the Conservative Party leadership contest, the ecological crisis is hardly mentioned.

Whatever our political views, if we want to survive with democracy intact, we all need a green right movement to emerge that can put clear blue water between Conservatism on the one hand and ecocidal neofascism on the other, pitching its own vision of sustainable prosperity. 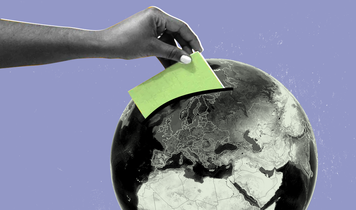