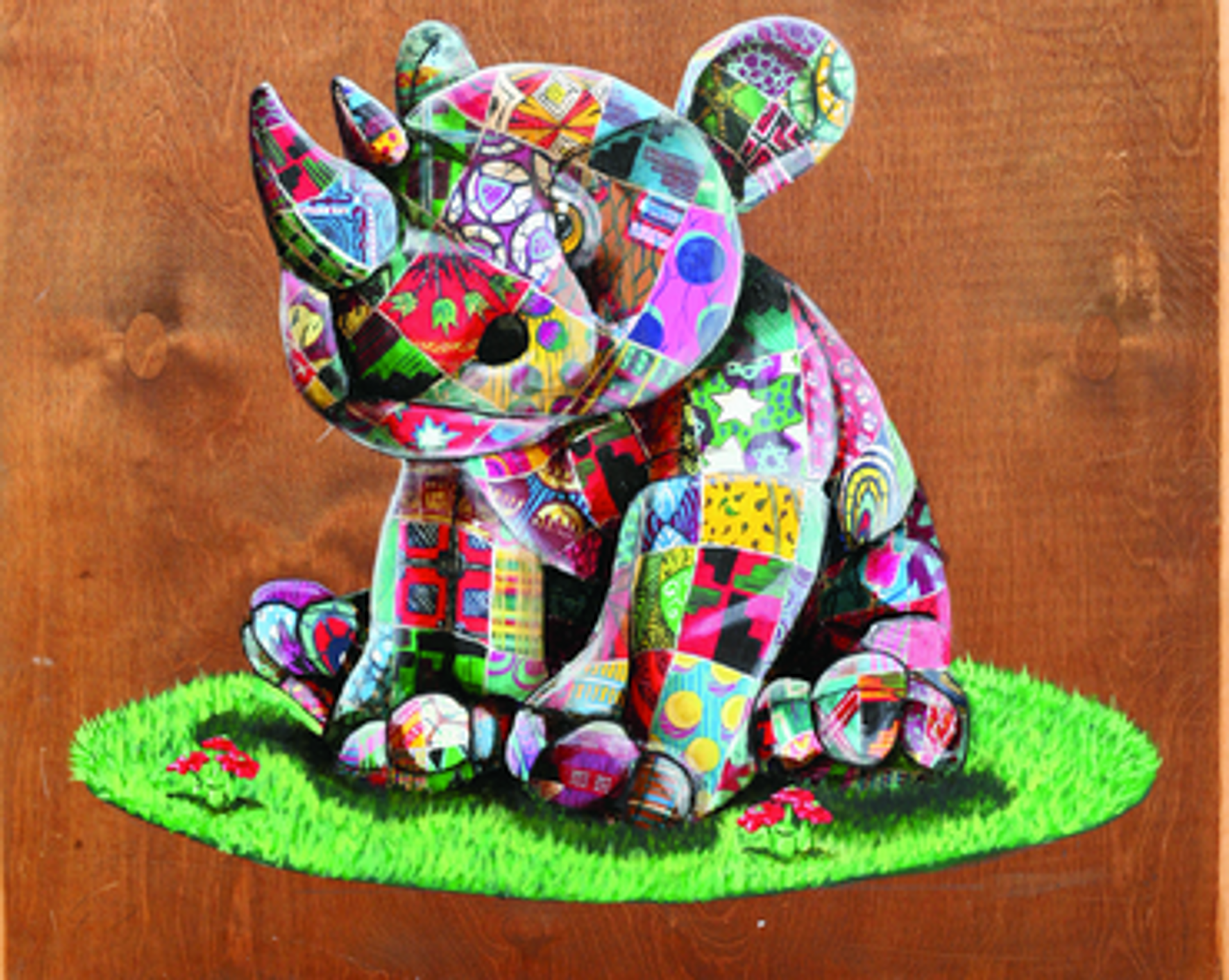 Louis Masai is the epitome of the contemporary engaged artist. He creates from a place of deep personal conviction. In a world where it is easy to be cynical about almost everything and dismiss much socio-political activity as a PR stunt, Masai stands for real belief. ‘Batteries not included‘ is his most ambitious show to date, encompassing an array of media in an effort to create an immersive experience and thus to stimulate engagement. This show is very much a statement of intent outlining Masai’s Gesamtkunstwerk manifesto. This show highlights the breadth of his practice by including paintings, prints, fabrics, furniture, sound installations, ceramics, and film. Joseph Beuys famously said after his 7000 Oaks project that “I not only want to stimulate people, I want to provoke them.” Louis Masai wants to provoke too and use his art as an agent for change and ecological awareness. He is an artist first and foremost but his strong beliefs inform his practice at every turn. Of course, it is easier for an artist to produce art for art’s sake – engagement on any socio-political level is fraught with risk. It is easier to fail both as an activist and an artist than it is to succeed. Masai is smart enough to know that and brave enough to carry on regardless. What immediately hits the viewer of this body of work is that Masai’s art is not a witty one-liner in the vein of Banksy; it is a reflection, a question, an invitation. It could be that someone with such an earnest mission could lack a sense of fun – this is not the case with Masai There is a joy in colour and a playfulness to his brushstrokes and compositions even when dealing with serious issues which places him in a pop art context. While his sculptures echo the resin accumulations of Arman, and his resin on canvas works were inspired by Polke, there is an idiosyncratic aesthetic that shines through his work regardless of the medium. He usually paints on reclaimed wood, which fits comfortably with the zeitgeist but in truth his vision doesn’t sit easily within any contemporary label. His work floats somewhere between that of pop art and classical painting. In terms of aesthetics his starting point is realism but the expressive nature of his painting overrides this desire for complete verisimilitude. His street practice should be understood as a dialogue and complementary to his gallery work. He paints on the streets because that is the most impactful place for his message. By embarking on painting 10 animals in 7 days on walls around London, he committed (like a baseball player pointing to the bleachers) to do something that could fail, both in terms of his own physical stamina or as successful artistic creation. In this sense his practice strayed into the realm of performance art ala Abramovic’s 512 hours at the Serpentine. His work does not lose any of its aesthetic appeal just because it comes from a very engaged place. JR once compared Swoon to Ai Weiwei by saying “She has always managed to have some social impact with her work and at the same time stay an artist, not an activist,” – this could equally be said of Masai. Like Beuys  Masai feels a pedagogical imperative and so a workshop as part of this show was not an add-on but intrinsic to the show itself.  We are reminded of another statement of Beuys: “After I am dead I would like people to say: ‘Beuys understood the historical situation. He altered the course of events’.” Masai understands that the ecological issue facing mankind is possibly the greatest threat we have ever faced and one, which this generation has a duty to address. When Masai says ‘one love’ he means it  - he means love in the sense of respect for all, in the sense of art as a sincere and authentic gesture, and a love that actively engages in making the world better. *** The show is open from the 1st of May until the 31st of May - Lollipop Gallery 58 Commercial Street London E1 6LT