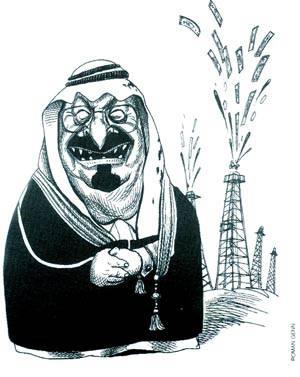 Fossil fuels are the most concentrated form of energy readily available on the earth and therefore the easiest to control and charge for. So perhaps it is not a surprise that the states that discovered they sat atop gargantuan, subterranean oceans of black gold have seen corrupt regimes grow fat, ruled by brutal dictators. As their own people rise up after years of oppression they cling to power with a mindless and vicious desperation. They lost their humanity along with their minds long ago to the spell of far too much money.

Corporations have for hundreds of years been perfecting the art of concentrating money and so they resonate perfectly with fossil fuels. Of the biggest five corporations in the world four sell fossil energy; with this has come immense power.

Today, corporations that, by definition, solely function to create profit for shareholders are the primary controllers of the supply and flow of information and energy around the world. The heads of corporations wield their power more subtly then dictators but they too have lost their minds. Even as the people revolt and the atmosphere threatens to run-away they are determined to keep concentrating the flows of energy and information to increase their own personal wealth.

Corporations have known for many years that the great oil wells will dry up so their eyes naturally turn to nuclear. Nuclear depends on an even more highly concentrated natural resource (Uranium) the movement of which is carefully monitored and controlled. It requires a high degree of technical knowledge to manage available only to an elite minority. The centralized facilities are also ideal for metering, furthering their concentration of wealth.

By controlling the information flows, corporations and their allies in government can maintain the widespread belief that we ‘need’ fossil fuels and nuclear to fill the ‘energy gap’. This is, in fact, bullshit.

Corporations are forcing fossil fuels and nuclear down our throats because this is how they can continue to most effectively concentrate their wealth. Unfortunately, because it threatens the future of human civilization this time it goes beyond the realm of standard, selfish greed and into the realm of Really Evil Bullshit. However, it is in fact the same bullshit that has been going on since prehistory; the elite minority concentrating and hogging resources and then misleading the masses. 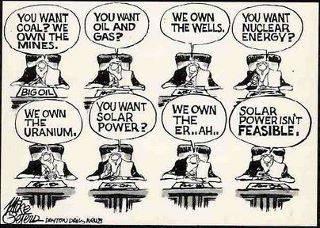 The safe, free and renewable energy we need to use is easily available if we have the right technology. To capture it we need to develop local, dispersed energy infrastructure and sustain major investment in the modal shift away from centralization. This revolution from central to local control represents the democratization of energy supply. Power literally changes hands from the corporations to us. We are talking, of course, about small local facilities for solar, wind, secondary biomass or combination of the three (and other appropriate small-scale local renewable energy technologies).

Renewable energy cannot immediately provide the same amount of energy as fossil fuels and nuclear. This is why we all have to use much less energy. However, so long as we share the energy fairly and ensure we have enough to be safe and comfortable this is not going to reduce our well being. Crucially though, the benefits of democratizing energy production totally offset the short-term reduction of energy available to us. It empowers the people and disempowers the corporations who have frogged marched us to global catastrophe.

When BP (rebranded as ‘Beyond Petroleum’) recently announced a 4.5 billion investment in further extraction of North Sea oil they were applauded by Prime Minister Cameron. This clearly shows the extent to which politicians turn their backs on the needs of the people and the planet and work instead on behalf on corporations. This is another 4.5 billion of capital spent going in the wrong direction: concentrating wealth and polluting the atmosphere.

When this 4.5 billion is added to the trillions that continue to be invested in fossil fuels and nuclear elsewhere we get a sense of the scale of the problem and it is clear that we can no longer allow corporations and corrupt politicians to keep making bad decisions. Their modus operandi (to concentrate wealth) is the opposite of what the people and the planet needs. Corporations must, once again, be brought under control of the people and only be entitled to operate if they can prove they do so without causing harm. The current economic crash is nothing new. The world economy famously crashed in 1929 and there was a run on the banks in 1933. Just like today the powerful elite had taken too much, gone to far and let their sick money madness run away with them. President Roosevelt responded with the New Deal. The banking system was investigated, found to be corrupt and cleaned out. There was huge government spending creating jobs and infrastructure. In short, Roosevelt spread the wealth around.

Today we need a new-New Deal only this time it must also rise to unprecedented, global, environmental challenges. It must spread the money around, make safe our energy supply and empower a majority of citizens to become actors in the shift to sustainability. Wrestling the control of energy, money and information away from corporations is the way to do all these things.

Democratizing energy supply is a key part of democratizing everything and moving to a sustainable, fairer and better world. It is a key element of sharing out Spaceship Earth’s natural resources in such a way that the crew is not oppressed, disenfranchised and apathetic. Instead we can become empowered to better ourselves, live better and together build civilization’s secure future.

The branched structure of trees allows them to most efficiently collect sunlight, which they transform, into hydrocarbons. So their roots branch to maximize the absorption of water. The neurons in our brain assume the same spread out structure to maximize their connectedness. The Internet, which works well, has also assumed naturally this dispersed structure. This stands in stark contrast to the way dictators, banks and corporations centralize flows of resources, energy information and money. This concentration is wrong because it leads to gross inequality and suffering for the 99% who foot the bill but it is also in violation of our planets biology, so it not surprising that it is killing the biosphere. In contrast distributed local energy can serve our needs without destabilising the biosphere.

The branched structure of the brain (left) and universe. The Internet also looks like this.