Some feel that rather than reintroducing formerly native but now extinct species to Britain, that instead we should prioritise our remaining wildlife. This view overlooks the salient fact that ecosystems are complex interconnected webs of life, and when species are lost, this will in turn impact other life that is a part of that system.

The UK is considered one of the most nature-depleted parts of the world, with much of our biodiversity in decline. In our manicured and ecologically degraded landscape, it is easy to overlook the influence species can have on the wider environment. By attempting to only safeguard what we have left, we risk falling prey to shifting baseline syndrome, where over time, the progressive degradation of our landscape will continue to erode our remaining biodiversity. One of the best things we can hope to do to safeguard our remaining wildlife is to embark on the reintroduction of formerly native species, particularly extinct keystone species or ecosystem engineers.

A keystone species has a disproportionally large influence on the wider environment relative to its abundance. In this sense, the presence of keystone species can help define the entire ecosystem they are a part of. An ecosystem engineer is a species that, through its activities, influences both living and nonliving elements of their environment, helping create, maintain or modify habitats. This in turn has implications for the diversity of life such an environment can support.

There are a number of such species being reintroduced, or being considered for reintroduction to Britain. In some cases, species such as the auroch or tarpan or wild horse are extinct, and in these cases ancient or ‘back-bred’ domestic breeds (such as longhorn or heck cattle and Konik ponies) are used as proxies, fulfilling the same ecological niche as their ancestral species. Below are four keystone species particularly well suited to reintroduction to Britain. 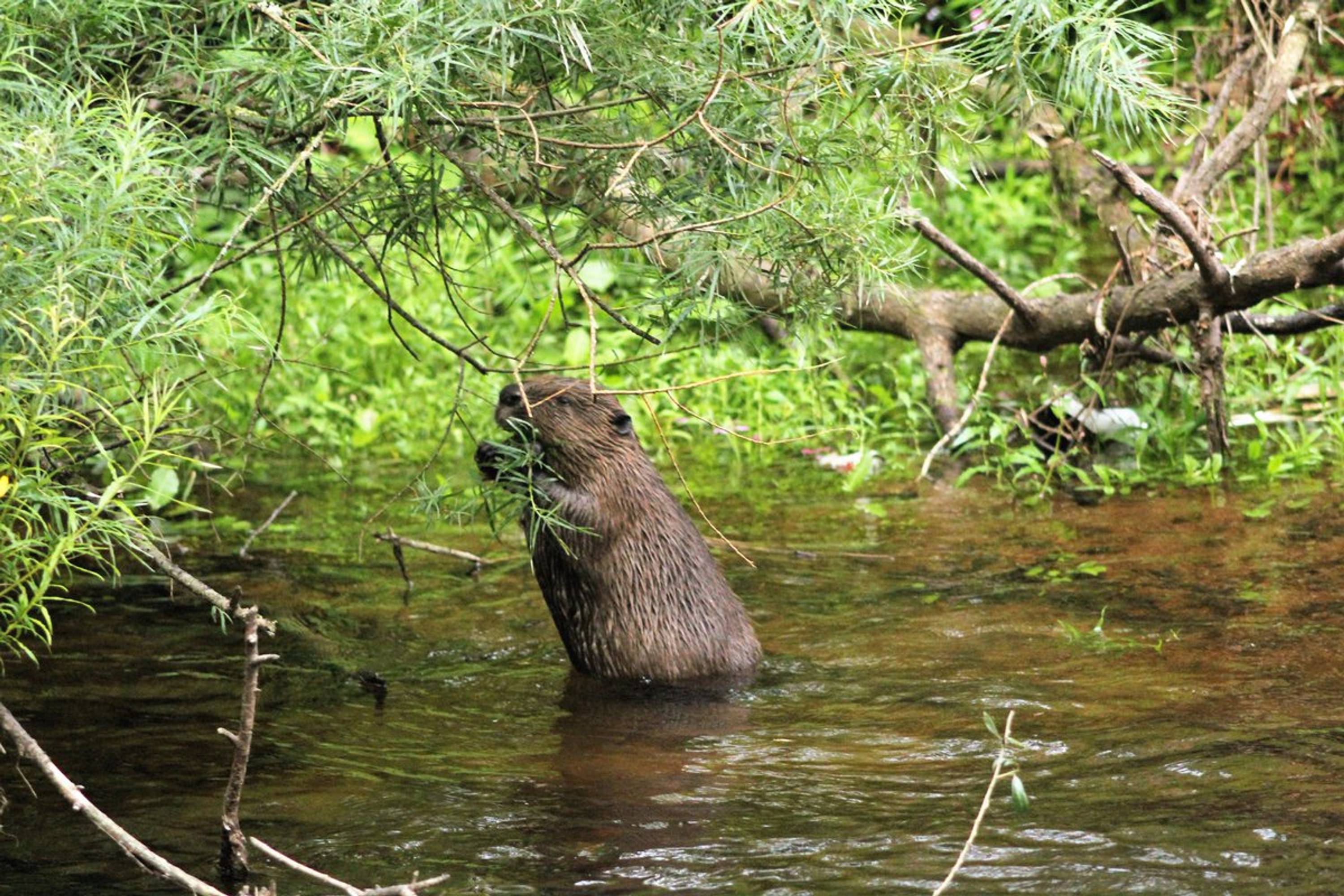 A textbook keystone species is the beaver (Castor fiber) which was hunted to extinction in Britain around 400 years ago. In terms of bang for one’s buck for biodiversity and environmental gains, it would be hard to top beaver reintroduction. We have lost around 90% of our wetlands in the last century, and an increasing scarcity of ponds poses a significant threat to our wildlife. Beavers are natural wetland and pond creators. They create richer wetlands than we are capable of, and they do it for free. These wetlands support a vast array of species. A variety of plants, invertebrates, fish, mammals, amphibians and reptiles all benefit from beaver eco-engineering.

In addition to creating wetlands, beavers coppice trees, and kill a few others by raising the water table. By doing so, more light reaches the ground, boosting the plant community there. The deadwood in these areas is an important food source and habitat for many different species. Beaver dams also filter out fertiliser and sediment from waterways, an important finding given that all English rivers failed to meet legal water quality standards due to pollution according to a recent assessment. Beaver dams also slow down water flow, allowing the land to hold more water…this in turn can buffer against flooding and drought. Beavers can cause localised flooding and damage to trees, but with appropriate management, potential negative impacts can be minimised, and the benefits of beaver presence enhanced.

On the continent, beavers have been successfully reintroduced to 24 European countries. Following the culmination of the five year Devon Beaver Project, the UK government allowed wild-living beavers the “right to remain” in Britain. In the words of Peter Burgess, Director of Conservation at Devon Wildlife Trust:

This is the most ground-breaking government decision for England’s wildlife for a generation. Beavers are nature’s engineers and have the unrivalled ability to breathe new life into our rivers. Their benefits will be felt throughout our countryside, by wildlife and people. Plans are in the pipeline to reintroduce a herd of European bison, also known as the wisent (Bison bonasus) to woodland in Kent in 2022. Bison were hunted to extinction in the wild in Europe in 1927, but reintroductions followed from captive populations. While not strictly a native species, they are the closest living relative to and partly descended from the extinct steppe bison, which once roamed Britain, and fulfil a similar ecological function, and therefore make a suitable surrogate for the extinct species.

Despite their size, they are docile animals, and pose no threat to humans, although they can be aggressive towards dogs (which they perceive as wolves). Through their activity and browsing, bison create a more varied mosaic of habitat in woodland ecosystems, forming openings or glades and creating areas of scrub where more light reaches the ground. This creates a wide variety of niches for other species, while allowing various plants to flourish that would otherwise be smothered by tree canopy. Cherished and increasingly rare native species such as nightingales and turtle doves are likely to benefit from this creation of scrubland habitat. The bare earth created by their dust bathing benefits plants and reptiles, and their tree rubbing and bark stripping creates deadwood which is an important food source for fungi and insects, and the birds that feed on them.

In the words of Paul Hadaway, of the Kent Wildlife Trust:

A wilder, nature-based solution is the right one to tackling the climate and nature crisis we now face. Using missing keystone species like bison to restore natural processes to habitats is the key to creating bio-abundance in our landscape. Despite being native to Britain, wild boar (Sus scrofa) UK and EU legislation pertaining to them is not supportive of their reintroduction here. Hunted to extinction sometime in the 17th century in Britain, boar are important keystone species. Through escapees or deliberate releases, a number of wild populations have become established in Britain.

They turn over the soil, and inject more dynamism into the landscapes they inhabit. Their activities can increase biodiversity, benefitting a number of different plant species and the species that depend on them. Ants benefit from these activities, colonising the exposed soil, and this has important downstream effects. Their wallows are important habitats for amphibians, and they can feed on and uproot bracken rhizomes, a trait unique to them, preventing it from smothering other plants and trees, allowing for regeneration of plant and woodland communities. Boars can cause damage to crops and gardens where their populations grow, and in the absence of predators in Britain, their populations will need to be controlled via licensed hunting. The reintroduction of apex predators is a more contentious issue. Eurasian lynx (Lynx lynx) are thought to have become extinct in Britain around 1,300 years ago, due to hunting and loss of woodland habitat. While some may fear the cats, they are shy and reclusive animals, and there is not a single recorded case of a lynx ever attacking a human or domestic dog. Sheep farmers are understandably more concerned about their reintroduction, but with the appropriate safeguards in place, there is no reason why lynx and people can’t coexist, as they do in much of Europe where they have been successfully reintroduced.

Lynx are deer hunting specialists. Deer overpopulation is a source of major and unrelenting ecological damage to Britain, particularly in Scotland, where their overgrazing prevents the natural regeneration of depleted woodland, which in turn would benefit many different species. The return of an apex predator such as lynx can result in downstream effects on ecosystem structure and nutrient cycling, known as a trophic cascade. Apex predators tend to act as guardians for the ecosystems they inhabit. In addition to controlling deer populations, lynx will alter the behaviour of deer and other browsers. Such behavioural changes have been observed in numerous situations where a predator is reintroduced. Prey animals such as deer will tend to move around more in the landscape where predators are present, while avoiding places such as ravines where they may be cornered. This spreads out the impact of their grazing over a much wider area, so allowing vegetation to regenerate.

A more biodiverse landscape not only provides more ecosystem services, it will also exhibit greater ecological resilience, which is all the more important in light of climate change. Our connection to nature, and our contact with it, is also very important for our psychological health and wellbeing, and there is increasing evidence to show that greater biodiversity enhances the positive impact of nature on human health. We should be doing all we can to ensure that the landscape we are a part of is as rich as it can be.

To halt or reverse the decline of our wildlife, safeguarding what we still have is not enough. We need to be more ambitious and think bigger if we are to reverse centuries of ecological degradation and biodiversity decline. The return of native keystone species to our landscape where they belong is one of the most important acts we can hope to undertake if we wish to safeguard our wildlife at this time, and for future generations. By doing so, we could reverse our ever-receding baseline as it pertains to our wildlife, and so move towards a more nature enriched future.

In the words of Rebecca Wrigley, of Rewilding Britain:

It’s increasingly clear that bold and imaginative rewilding is urgently needed to tackle the country’s worrying loss of wildlife.

Eager for beavers: inspiration from Bavaria