Factory farmed animals consume 90% of soya imported into the UK

Factory farming isn’t just barbaric and cruel on the animals involved it is also decimating the natural world. Pigs and chickens crammed into sheds in the UK consume 90% of imported soya. The Amazon, along with other vulnerable ecosystems of the world, are being torn down to keep cheap meat flooding the UK market. Change is needed now - before it is too late.

A staggering 60% of global diversity loss is down to the food we eat. The biggest issue of all comes from the crop based feed our farm animals consume. Globally 70-90% of the worlds soya bean crop is used as animal feed, and here in the UK we import 2 million tonnes yearly for animal feed. Soya has become a widely used feed ingredient because it is cheap and high in protein. The majority of the soya used for animal feed in the UK is fed to intensively reared poultry (**60%**) and pigs, also farmed fish and cattle.

Brazil is the second largest producer of soya beans in the world, growing 24-25 million hectares (almost half of Brazil’s total cultivated land). Brazilian soya exports (mainly to the EU and China, were worth $31 billion in 2015. As a consequence, soya bean production is one of the main agricultural supply chains that is driving deforestation in Brazil.

Concerns over widespread deforestation in the Amazon led to a 2006 agreement between environmental groups and large agricultural corporations called “The Soy Moratorium". The moratorium prevents the use of soya beans grown on land deforested post 2006. Since 2006 Soya bean production has expanded by a million hectares in the Brazilian Amazon, but only 0.8% of that expansion occurred in newly deforested areas. Although this is restricting ‘legal’ destruction of the Amazon, illegal logging still occurs and is responsible for 80% of current Amazonian deforestation.

The Soy Moratorium however is not all good news. The underlying demand for soya bean production still exists. There is still population and economic growth, with a growing shift towards intensive animal production in the UK and other major importers such as China. This has resulted in a silent shift of land clearing in other areas of Brazil not covered by the moratorium. The global outcry to protect the Amazon rainforest, along with Brazil’s permissive land-use policies and cheap farm acreage has resulted in a deforestation rate in the Cerrado, Brazil’s savannah ecosystem, far greater than that in the Amazon rainforest. The Cerrado extends to cover an area over 2 million square kilometers across central Brazil (21% of the country's land area), it is the second largest habitat type after the Amazonian rainforest and is one of the richest tropical savanna regions, home to 5% of species on the planet. Animals of the Cerrado include the rare and near threatened Jaguar and Maned Wolf, and the vulnerable Giant Anteaters and Hyacinth Macaws. Brazilian officials have cited protection of native vegetation in the Cerrado as critical to meeting it’s obligations under the Paris Agreement on climate change. However scientists warn the biome has reached a tipping point which will lead to an increase in global warming. The Cerrado has lost more than 105,000 square kilometers of native cover since 2008, according to government figures, which is 50% more than the deforestation seen during the same period in the Amazon.

In the Cerrado, similarly to the Amazon, there is much illegal deforestation, but not only this, the massive devastation in the area is largely a result of insufficient regulation and protection of the land, with 85% of native vegetation being converted to soya beans being legal under the Forest Code. 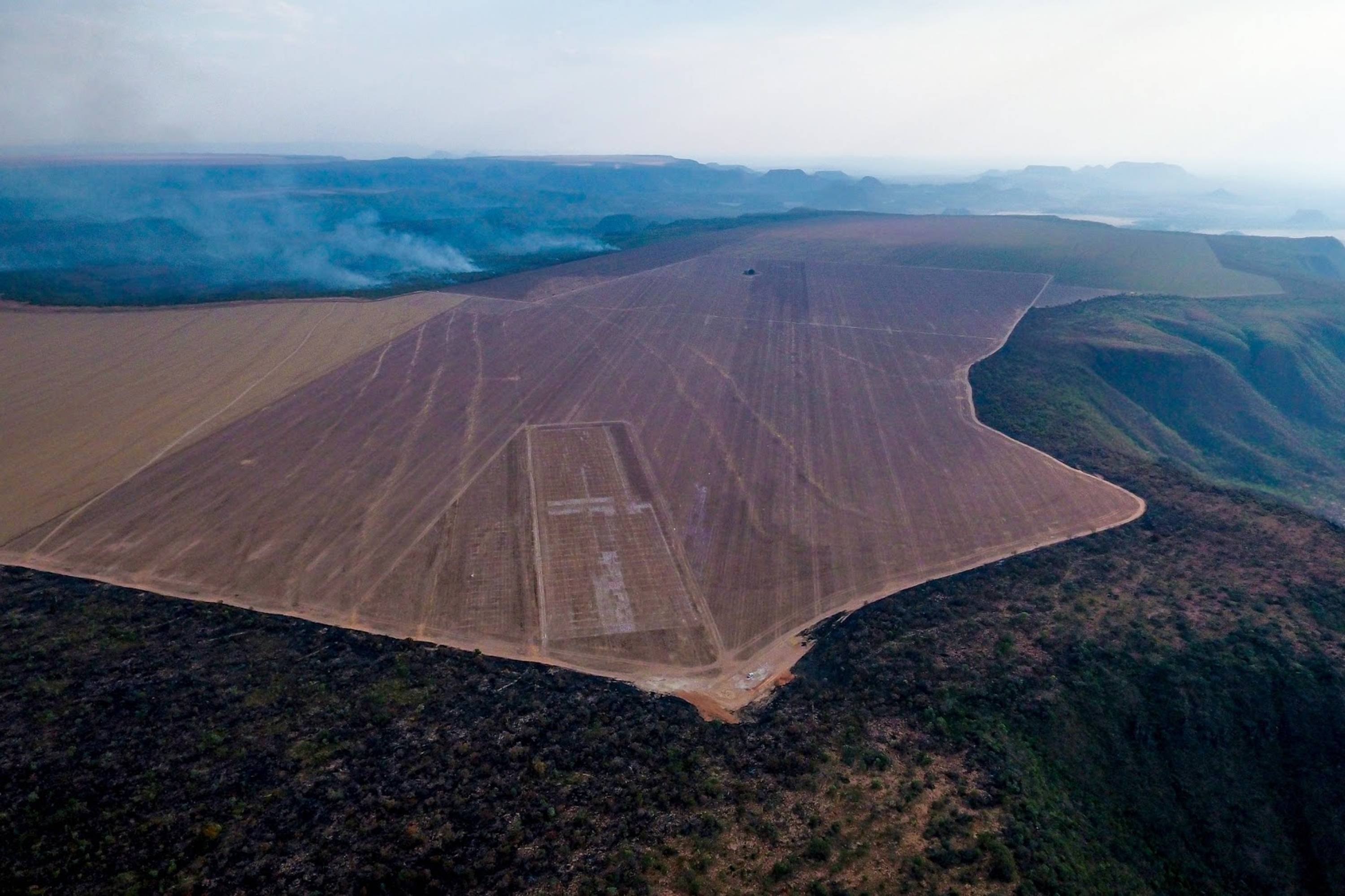 In the UK, and globally, there is a huge demand for soya products to produce cheap meat. Since rising trade tensions between China and America, China has become Brazil's number one buyer of soya beans, which are fed to pigs and chickens to satisfy the tastes of it’s increasingly affluent, meat-hungry consumers. What consumers fail to see is the connection between the soya bean-fed meat on their plates and the steady decline of one of the world's richest troves of wildlife and destruction of one of the biggest carbon sinks in the world.

So while many unwittingly continue to purchase cheap meat products in the UK, while commercial food chains like Burger King continue to sell meat fed on soya bean products imported from Brazil, and while we are experiencing global population and economic growth with increasing human demand for soya bean products, the ecosystem continues it’s rapid decline, global emissions continue to rise and we rapidly head towards complete environmental collapse.

Philip Lymbery, the CEO of Compassion in World Farming said,

This is a planetary crisis. Heads of states, policy makers and business leaders need to re-evaluate and change our food system no matter how hard or inconvenient it is. Time is running out and it is our job to remind them; for the planet, animals and people.

Governments, corporations and citizens of the world urgently need to rethink current eating habits and food production systems. In the longer term this is to prevent environmental catastrophe, but in the short term, action is needed also for our health. WWF say the meat we eat has become less nutritious since intensive animal farming, due to declining healthy omega 3 content of animal products and a rise in unhealthy saturated fat. Astonishingly you would have to eat 6 intensively reared chickens today to gain the same amount of the healthy omega 3 fatty acid found in just one chicken from the 1970’s.

The widespread shift to a reduction in consumption of animal protein has multiple benefits for humanity. It enables us to farm in a more sustainable way, protecting our ecosystem and leaving more room for wildlife. It also enables us to produce healthier and more nutritious food. An oversupply of cheap meat carries enormous costs for our health and our planet. It is time to close this chapter of human history. Factory farming is a grotesque aberration that is devouring the natural world.

Practical steps you can take now -