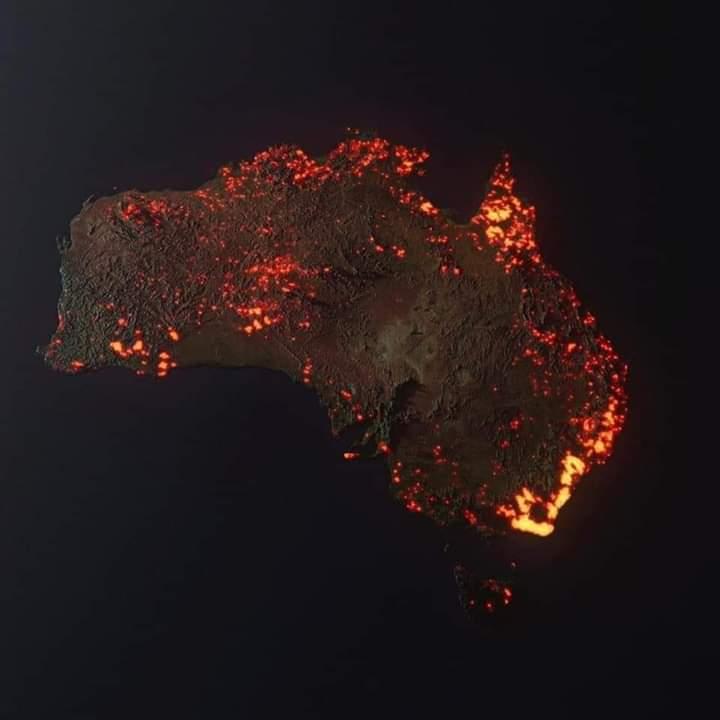 3D “visualisation” of the fires in Australia, made from NASA satellite data. Credit ~ Anthony Hearsey

At the start of a decade that will determine the habitability of our planet, the spectacle of a first-world country engulfed in flames has catapulted the climate emergency to the top of the global news agenda.

Australia’s unprecedented wildfires, blazing since August, have razed 15.6 million acres at the last reckoning, massively outstripping the fires in the Amazon and Siberia. 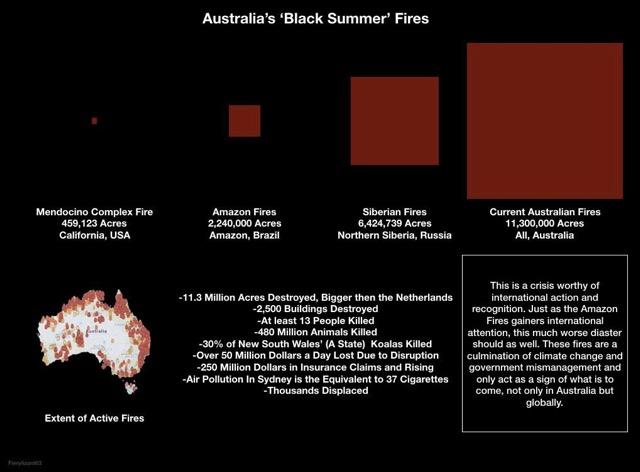 With the devastating impacts of climate breakdown happening in real-time across New South Wales and Victoria, Australia stands at a crossroads.

The country has one of the highest per capita emissions of carbon dioxide in the world, with its 0.3% of the world's population responsible for 1.07% of global greenhouse gases. If you add in its coal exports (Australia is the world's largest exporter of coal) that figure is 4%, making Australia the sixth-largest global emitter.

The Australian government’s unswerving support for the fossil fuel sector weds it to a path that accelerates our global tilt towards irreversible and catastrophic climate change. 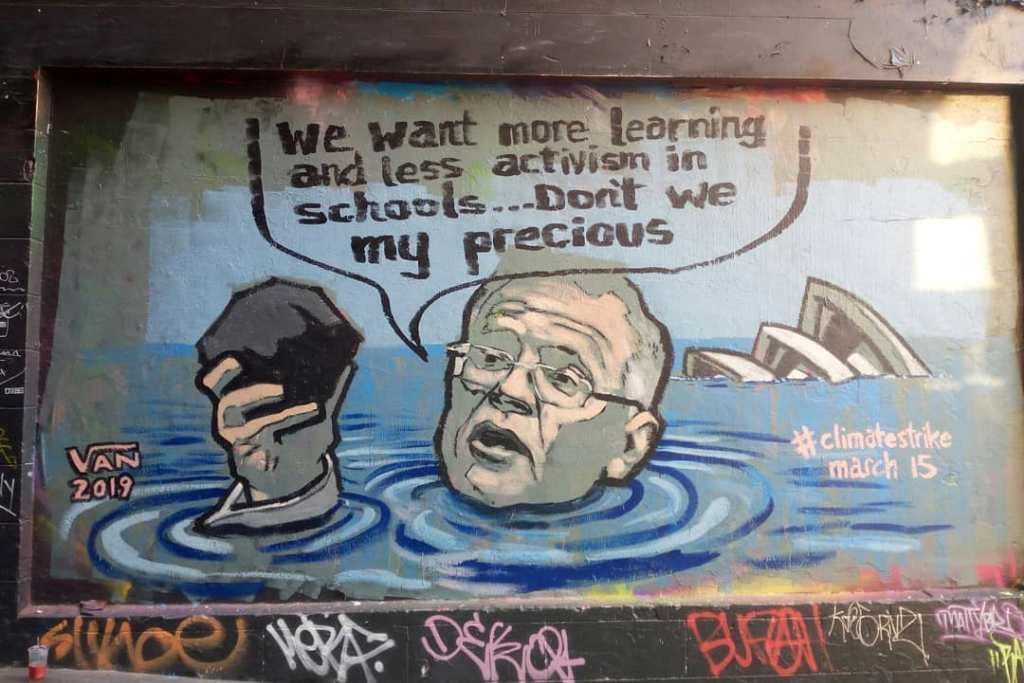 Australia must choose another course. Economic growth that comes at the cost of the habitability of the planet on which we all depend is not worth having. The extraction and combustion of fossil fuels, for so long considered vital for improved quality of life but which is now proven to threaten the very survival of our species, quite simply no longer makes sense.

Instead, the race is now on for nation states to develop new ways for human potential to be unleashed to enable thriving, prosperous communities without burning fossil fuels or damaging ecosystems, and, by rights, Australia should be in the lead. Its enormous, largely empty land-mass, rich in natural resources, has the potential for a world-leading shift to a new kind of regenerative economy. Australia has the brains and the brawn to dismantle a system built on fossil fuels and lead the charge to a clean, green future.

The most extreme climate events are happening quicker than expected meaning it’s too late to adopt incremental policies to cut our emissions. For governments, the top, most rapid and radical policy fixes to date include:

2. Back a Green New Deal - global fossil fuel subsidies in 2017 were $5.2 trillion. These government handouts need to end now and huge federal investment money needs to be directed towards building a whole new economy and especially new clean energy infrastructure. We need solar and wind farms, electric railways and afforestation on a scale unseen since President FD Roosevelt major programme to power America’s recovery from the Great Depression.

3. Be bold enough to talk about degrowth - it is no coincidence that the only year emissions fell, 2009, was also the year in which the global economy failed to grow. Degrowth means maintaining a high quality of living while downscaling production and consumption and overall contracting the global economy to allow nature room to regenerate. These policies can be very popular and boost well being. For example, in Finland, they are trialling a 4 day working week. Degrowth policies can also include caps on resource use, job guarantee programmes and payment to restore ecosystems. Most crucially, it involves uncoupling the seemingly indivisible link between economic growth and human progress.

4. Half for nature - a coalition of scientists have started to argue that to stabilize the climate and secure a viable future for our children we must set out to rewild half the world, with at least 30% of Earth needing protection by 2030. Nature, goes the thinking, must be allowed to get on with the provision of ‘ecosystem services that no-one can live without.’ 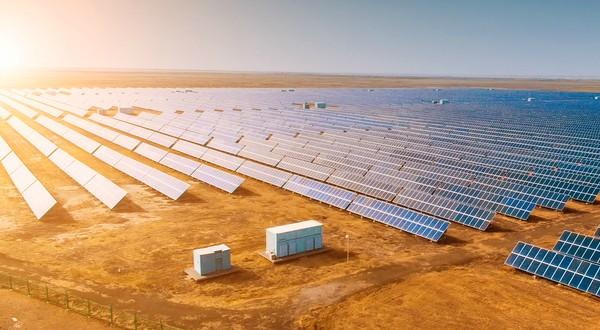 The world needs to completely stop burning fossil fuels, as fast as is technologically feasible: this means zero oil business, zero natural gas business, zero coal business, zero internal combustion engine business. Australia could be at the forefront of developing and reaping the rewards of clean energy technologies. There is a huge opportunity for Australia to lead the world in building the products and services we’ll need to power a fossil-fuel-free world.

1. Creating a surplus of clean energy

Michael Liebreich of Bloomberg New Energy Finance rounded off 2019 with a blog anticipating the further decline in the price of generating clean energy. He identifies Australia as one of the world’s best locations for low-cost wind and solar energy generation. Huge empty swathes of land, an almost endless coastline. All that’s missing is political will which is supremely possible with a change of political leadership, or with sufficient civil unrest.

Some have argued that Australia moving away from coal would impact the economically important aluminium industry, however this argument is largely ideological: it is technologically possible for smelters to run on clean energy as demonstrated by Hydro in Norway.

The potential for clean energy is so great in Australia that new project - Sun Cable - connects a giant solar farm in the Northern Territory to supply clean electricity to Singapore. The developers claim it could provide one-fifth of the island city-state’s power needs. An issue with rolling out large-scale renewable energy projects has been intermittency and how to store the energy. Australia’s youngest billionaire (and Sun Cable investor) Mike Cannon-Brookes famously lost a $50M bet with Elon Musk after Tesla managed to instal the world’s largest lithium-ion battery in Australia within 100 days. Cannon-Brookes said:

In a carbon-constrained world, Australia should be a superpower.... If we nail this, we can build a new export industry for Australia, create jobs and set our economy up for the future.

Last week, an international team of researchers published a paper highlighting that the transition to a low-carbon future will place an immense demand on the critical raw materials required to manufacture low-carbon technologies, many of which Australia holds in abundance. Ben Radley, one of the co-authors of the paper and a Fellow in Development Studies at the London School of Economics, said that "turning away from coal and towards meeting demand for critical minerals presents a huge economic opportunity to Australia whilst mitigating against climate risk".

Astonishingly, the giant leaps forward being made in clean energy in Australia come entirely without government support. Imagine the rate of change and drop in emissions if all government financial, political and logistical support for the fossil industries was switched to the new disruptive businesses that have effective plans for responding to the climate emergency?

2. Food from the desert

In a desert region of southern Australia is Sundrop Farms that grows and supplies 15 percent of the entire country's tomatoes without using soil, fresh water or fossil fuels. In 2015, the business constructed a 20 hectare solar-powered greenhouse facility in South Australia which now produces over 15,000 tonnes of truss tomatoes (on the vine) each year to supply the Australian supermarkets - the world’s first combined heat, power, and water system powered by solar energy for greenhouse production. 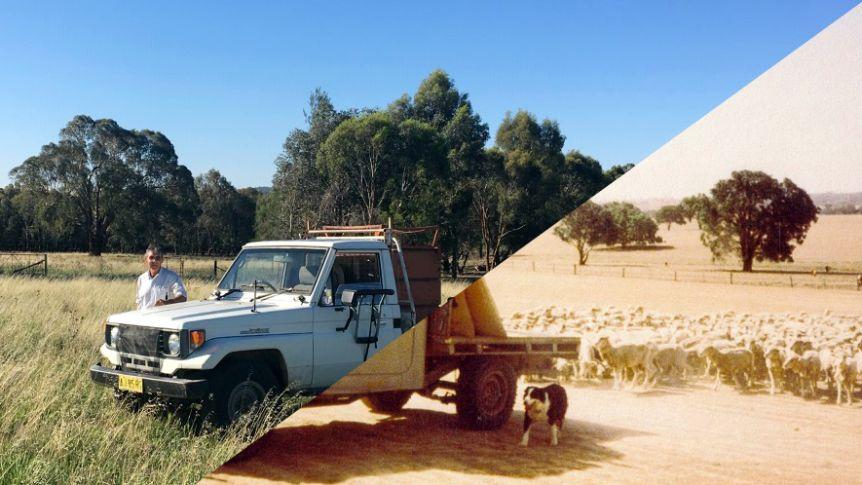 Regenerative agriculture rebuilds soil by drawing carbon out of the atmosphere. The potential here is so great that it is described as a $15 trillion opportunity for farmers to fight climate change. Summer 2019, Indigo Agriculture launched the Terraton Initiative to accelerate carbon sequestration by agricultural soil on a massive scale. They claim that the world's 12 billion acres of agricultural soils offer the most immediate, scalable, and affordable opportunity to remove carbon dioxide from our atmosphere.

To catalyze the initiative, Indigo is creating Indigo Carbon, a market providing growers with the financial incentive to implement regenerative practices that reduce or remove carbon from the atmosphere. Growers who join Indigo Carbon for the 2019 crop season are eligible to receive $15 per metric ton of carbon dioxide sequestered. The goal: to capture 1 trillion metric tons (a teraton) of carbon dioxide worldwide.

True wilderness no longer exists on Earth. We live in the age of the Anthropocene - humans have impacted the entire surface of the planet. Before human influence, most of the world’s land mass was forested. Sunlight rarely hit dry ground. It was intercepted by complex canopy. Giant herds of herbivores feasted on the abundant plant mass and distributed enormous quantities of dung cycling nutrients back to the soil. Large predators kept the herds on the move and controlled their numbers. The planet was green, wet and much less flammable.

Most of the threats to civilisation, as detailed in Jared Diamond’s seminal book on the topic, Collapse, are based upon humans undervaluing and damaging the natural systems that sustain us. The principle of rewilding is based on the appreciation that humans need a complex ecological life-support system to survive. We cannot make clean air, water and everything else that we need without a healthy and abundant biosphere. 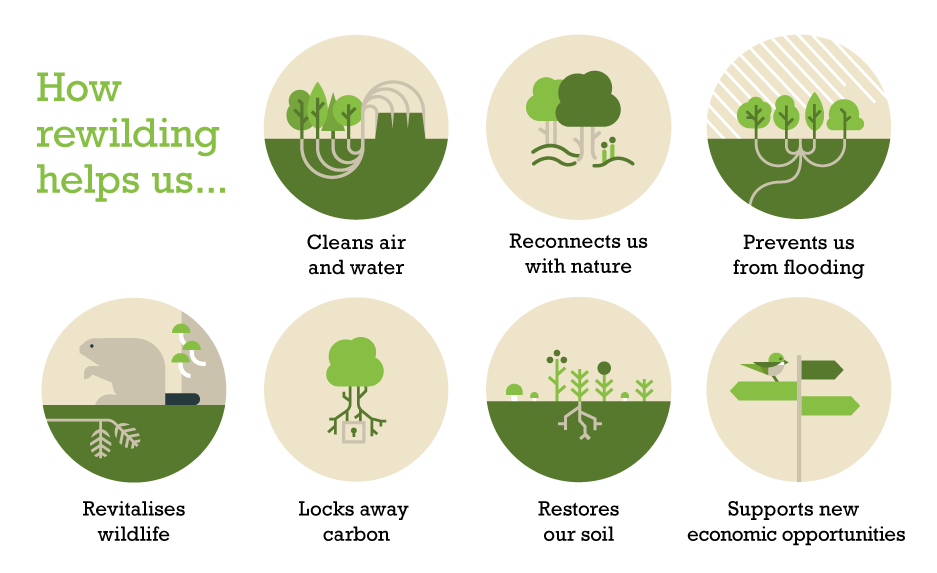 Australia has lost 25% rainforest, 45% of open forest, 32% woodland forest and 30% of mallee forest in 200 years. Putting these forests back does more then simply draw carbon out of the atmosphere. These trees create diverse, moist ecological systems that provide a range of ecological services. After turning off fossil fuels, planting trees is our best defence against future fires. Planting these trees and restoring ecological systems is important, meaningful work that can occupy and inspire a new generation rapidly losing faith in the corrupt contemporary economy.

It's time to re-think Australia's future. We've got to get on top of land clearing. We've got to test every strategy we can to bring back our vital and often missing mammals. We've got to become global leaders for climate-change action and we've got to realise that we're already a hot, dry, fragile landscape.

Perhaps the most famous rewilding success story is the reintroduction of wolves to Yellow Stone National Park. Scientists are learning that diversity is crucial to keeping vibrant ecosystems alive. It is not enough to simply replant trees. A wide range of critters are also required to keep nature thriving.

I want you to act as if the house is on fire, because it is.

Australians enjoy an enviable standard of living, their inheritance of decades of extraordinary technological and economic achievements of the Industrial Age. It is coal that got us here but not only can coal not take us any further, coal now risks our very survival.

The same human ingenuity that harnessed coal to power early industrial progress has now found humanity inexhaustible, clean alternatives that shift us towards a liveable future and a resilient civilisation. Today’s pioneers, visionaries, and any leader worthy of the name, are backing these changes like their lives depend on it. Because they do. Powerful vested interests in the fossil fuel economy and those politicians they fund will keep working to prevent this switch to clean energy. We are not powerless. To usher our leaders to the right side of history, petition parliament, switch to green energy, demand divestment and also, take part in mass civil disobedience campaigns and general strikes via global climate strikes.

Australians are renowned for their courage and their love of the great outdoors. Never have these two qualities been needed more. The eyes of the world turn to Australia. The people there are on the front line of the climate emergency. Their next move could prove decisive for us all. 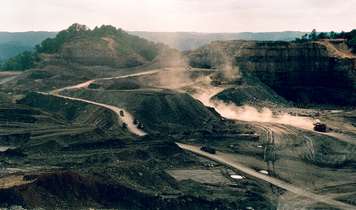