The people versus airport expansion

Aviation is the most climate harming mode of transport. Aircraft emit various other substances in addition to CO2, leading to an overall climate impact of aviation that is at least double the effect of the emitted CO2 alone. While two decades ago flying was still something special, today in the Global North it has become normal to fly somewhere for just a weekend. Work relations are often built upon the existence of cheap flights and ever more trade of goods is being done by airplane. Aviation produces already a significant part of the world’s total greenhouse gas emissions, despite less than 10 per cent of the world’s population flying. This privileged mode of transport is at the expense of others: residents exposed to noise and particle pollution, local ecosystems, future generations and those in the Global South who are already bearing the brunt of the impacts of the climate crisis. This is a crisis which will only become worse, as the emissions from aviation are expected to quadruple until 2050.

The EnvJustice Project of the Environmental Science and Technology Institute at the Universitat Autònoma de Barcelona (Autonomous University of Barcelona) ICTA-UAB and the Stay Grounded network have registered more than 300 socio-environmental conflicts related to the expansion or creation of new airports or aerotropolis (airports surrounded by industrial and commercial zones). 60 of these have been analyzed and are included in this map (https://stay-grounded.org/map/)).

Some of these conflicts began in the 1970s (such as Guadalajara, México), but the majority started since 2010 when the expansion and creation of new airports around the world accelerated. The cases are located as much in the Global South as in the North, and are just as likely in urban areas as in rural ones. More than 50% of the cases are found in Asia and almost 20% in Europe.

Most of these conflicts are caused by the expansion of aviation infrastructure, “justified” through discourses on development such as the construction of airports after a natural disaster (eg. Barbuda), the growth of the economy, tourism (eg. Costa Rica), or improving security (eg. a new airport for passenger flights and defense purposes in Pakyong, India). New airports and expansion of existing airports are shown on the map, focusing on military defense, passengers and/or commerce; as well as infrastructures for the transport and storage of kerosene, and aerotropolis projects (airport cities) which are airports surrounded by facilities aimed at tourists such as shopping malls along with industries that depend on aviation. 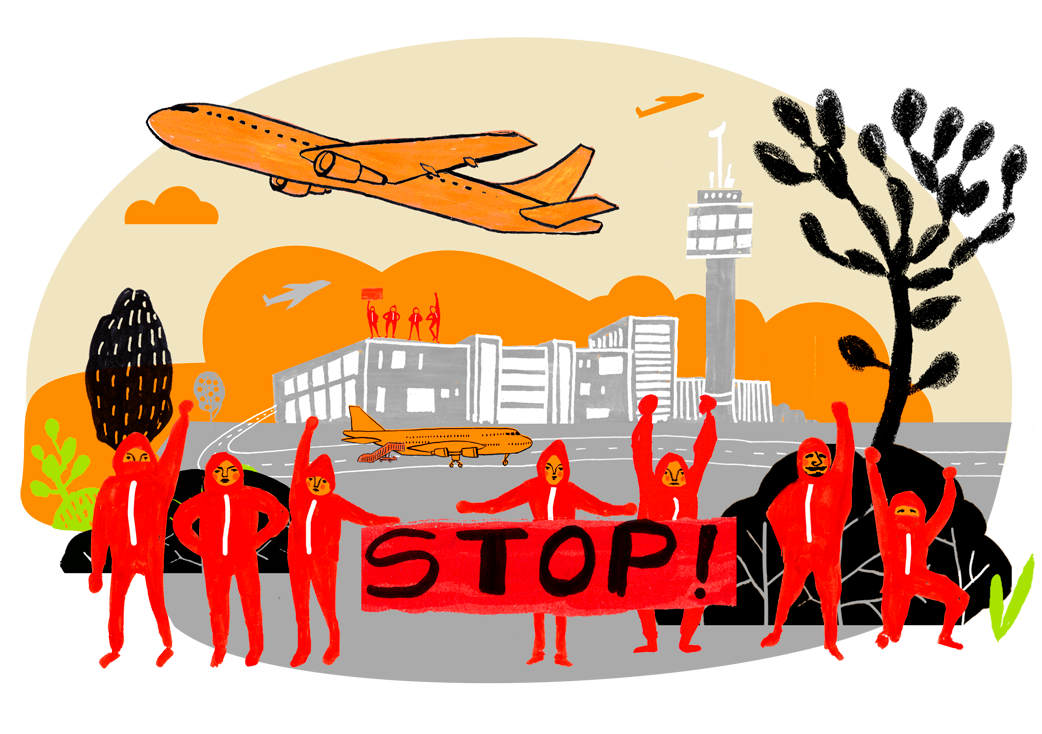 Airport projects have resulted in forced evictions, dispossession of land (examples include Obudu Airport, Nigeria and Yogkyakarta, Indonesia), destruction of high biodiversity ecosystems such as mangroves, wetlands or dense forests (Atenco, México), destruction of sacred sites and areas of high cultural value (Kerala, India), and grave damage to the health of people and nature caused by chemical and noise pollution (Vienna, Austria). One of the most serious cases of deforestation in Sri Lanka occurred in the area where the Mattala Airport was later built. Another project that threatens large scale deforestation is construction of an airport in Mopa, India. In addition, conflicts do not only occur because of the construction of the airport, but also because of extraction and transport of materials needed for aviation to function, such as the large quantities of land, pipelines and tanks to store kerosene (Vanouver, Canadá). The cases of Komo Airport in Papua New Guinea and the airport in Gautam Buddha, Nepal demonstrate conflicts related to the extraction of sand and gravel for construction of airports. Mangroves in Manila Bay have already been destroyed for construction of Bulacan Aerotropolis in the Philippines and coral reefs and seabed may be at risk due to a proposed second airport on the island ofTioman, Malaysia.

The construction of airports also has serious impacts on the environment and health of people who live close by. Residents living in the midst of earthworks have suffered from accidents caused by falling rocks during construction work (eg. Navi Mumbai). Once airports are in operation, neighboring communities are at risk from illnesses related to high exposure to pollutants emitted by aircraft and noise.

However, these injustices are being denounced and protested by environmental and social justice movements. Locally, fisherfolk, peasants, and urban citizens, and globally, climate justice groups have achieved big and small victories: they have stopped, suspended or re-located infrastructure projects; increased compensation; or reduced the negative effects on the most affected communities. In 40% of the cases, the movements have achieved at least one of these victories, and of these, 80% are cases where mobilization began before the construction of the infrastructure, in other words, mobilization that has tried to prevent the injustice and its impacts. Often governments and companies use compensation mechanisms to demobilize the opposition to these infrastructure projects, however in some cases these have been considered a victory by affected people and movements supporting them.

New airports have been successfully halted because they threatened the destruction of farmland in Nantes, France, or wetlands in Texcoco in Atenco, Mexico. But often these stoppages are only temporary and do not mean the end of a conflict. Projects are usually suspended only temporarily or are relocated elsewhere. Similarly, projects have occasionally ceased after they have already created serious environmental and social impacts, such as was the case of an airport on the island of Koh Phangan, Thailand, that was stopped after the forest was illegally logged.

In terms of partial victories, movements have achieved compensation for land acquisition such as in Bhogapuram, India. There have also been judicial decisions in favor of the affected population. For example, in Ekiti, Nigeria, where local people were illegally evicted, the court ordered the payment of the damage caused.

Mapping as tool to strengthen connections between movements

The majority of these struggles and environmental and social resistances have been repressed by states through forced evictions, harassment, intimidation, arrests, imprisonment and violence, as almost 80% of the registered cases demonstrate. Among these cases, suicides of people who have faced eviction because of airport projects have also been documented. The mapping project of airport conflicts serves as a tool to strengthen the connection between affected groups and environmental, social and climate justice movements.

There are also conflicts related to airports in Barcelona (although these are not yet included in the Ejatlas). Residents in Castelldefels, El Prat and Gavà have been protesting against noise pollution and for the right to health for more than 13 years. In a common struggle, local and global movements for environmental and social justice are coordinating to confront this new threat that will further increase tourism, noise, pollution and global warming in the city of Barcelona. Through the organization of the conference that took place on 12 – 14 July in Can Batlló (Barcelona), the network of resistance against the new project to expand the Prat – Girona airport is being strengthened. This resistance connects the Stay Grounded network, with local movements and groups that oppose mass tourism and are for climate justice, platforms for the right to housing, environmental justice and urban feminist organizations, and groups affected by the current El Prat airport.