There is nothing you can say about the cruelty, barbarity and sadism of the Yulin dog meat festival that does not apply to factory farms operating in the UK 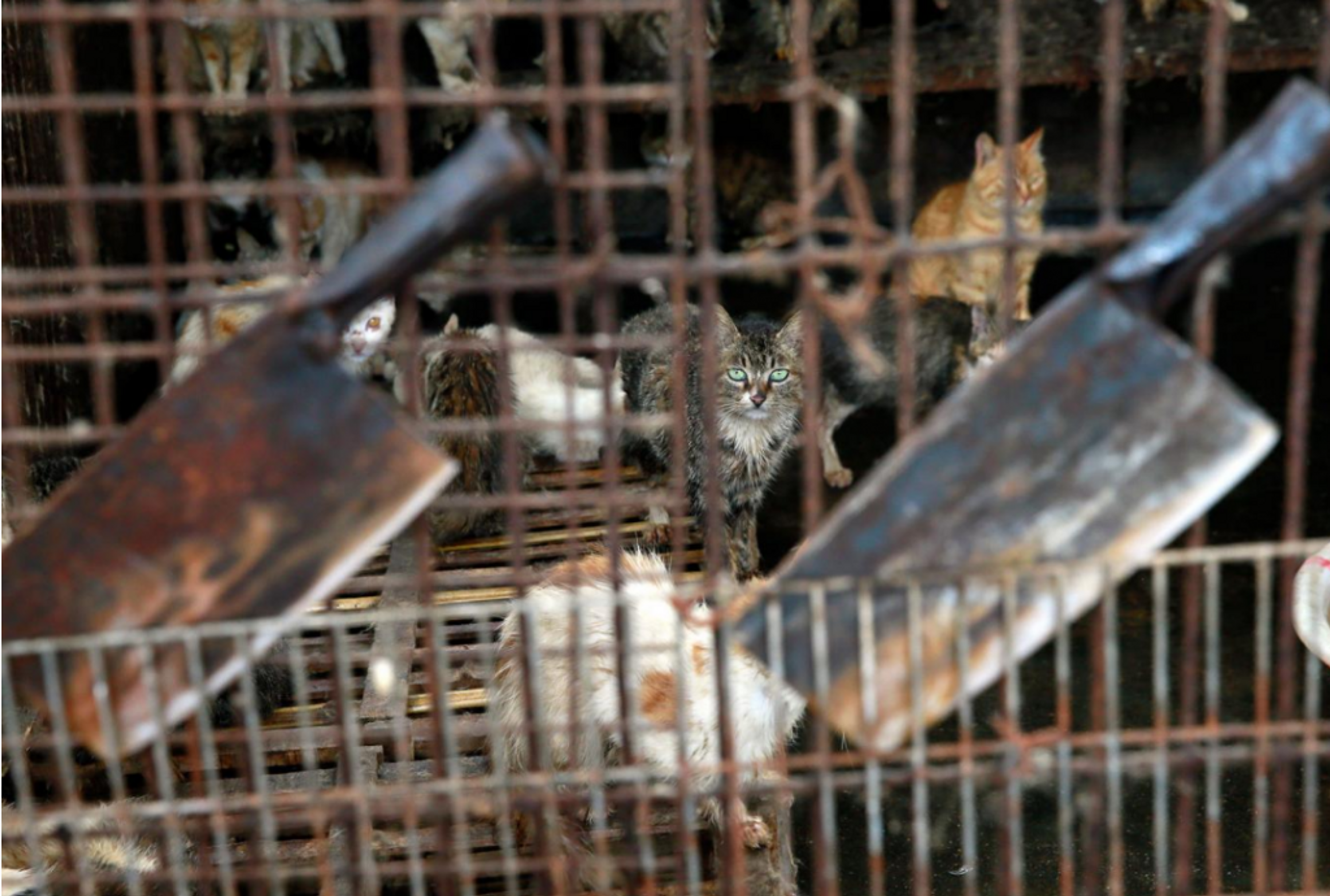 Cat's soon to be slaughtered in Yulin[/caption] Avaaz “the world’s biggest activist network”, founded in New York and run by Americans, Canadians and Australians, has turned its attention and mighty advocacy powers to a Chinese city called Yulin. This city would not be known to us in the West were it not for its annual dog and cat eating festival which Avaaz describes as “inexcusable.” At this festival it is estimated that 10,000 - 15,000 dogs and cats are slaughtered for their meat. To put this number into perspective, in the UK around 22 million animals are slaughtered every day; 919,000 an hour. That is 15,000 per minute. It strikes me that if we in the West are going to launch a campaign to prevent animal cruelty we should target the biggest instances of animal cruelty and focus upon our own political sphere of interest first. The current level of media interest in Yulin, the popularity of the campaign to shut down the festival and the braying of outraged celebrities all demonstrate the mass denial of what is happening in our own countries right now. [caption id="attachment_8643" align="aligncenter" width="640"] Pigs in British factory farm[/caption] Neoliberal capitalism has pushed small farms out of business giving rise to the predominance of industrial agriculture. The Farms Not Factories campaign estimates that 70% of pork sold in the UK is from factory farms. There is absolutely nothing you can say about the cruelty, barbarity and sadism of the Yulin dog meat festival that does not apply several times over to factory farms operating in the UK. At least many of the dogs and cats will have had some time in their lives running free. The cows, pigs and chickens raised in factories live lives of nothing but torture from start to finish: they have no chance to form normal social bonds; their movement is restricted; they suffer agonizing mutilations and they are killed brutally in front of each other. Protests about the killing of cats and dogs in China while ignoring the abuse back home demonstrates several important things. Firstly, people in Western countries willfully deny that the animals we eat (pigs, cows and chickens) are intelligent or have feelings. This is solely based on a widespread cultural delusion and has absolutely no grounding in biology or science. Research has shown that pigs are smarter than dogs, and can solve problems just as well chimpanzees. Anyone lucky enough to play with a tame pig can experience this first hand. Secondly, we refuse to acknowledge the vast edifice of cruelty upon which the current, mainstream food system relies. The abundance of cheap meat on sale in the UK depends upon the systematic torment of intelligent creatures in appalling factories that future generations will look back on with a similar horror to how we view concentration camps today. We simply shouldn’t treat animals like this in 2016. Finally, the fact that we wilfully ignore the intensity, extent and systematic nature of our own widespread cruelty to animals while singling out a Chinese city’s (minute in comparison) festival of torment is racist. We prefer to criticize the dirty, cruel, stupid Chinaman then deal with the monumental extent of our own dark deeds. Similarly, we blame the Chinese for global pollution while they make us products. We would be better to first set an example, get our own house in order before rounding on other nations. The one area where the world should unite to condemn the Chinese is in their consumption of endangered species. This affects all of us and has global ecological consequences and urgently must stop. Campaigns to stop species extinctions§ are more important now than ever but can be lost beneath the noise of misguided animal cruelty campaigns that distract us from more significant and urgent ecological and welfare issues. The thought of thousands of judgemental white fingers wagging at the Chinese eating a relatively small number of dogs and cats strikes me as both absurd and deeply ignorant. Up and down our own country millions of pigs are in agony. Their bright brains in a constant state of desperate longing for release from the endless torment: to trot on some grass; nuzzle in the earth; play with their friends and breathe fresh air. Before broadcasting our cultural disdain and contempt why don’t we think deeply about the gargantuan cruelty happening in our neighbourhoods do something about that? Avaaz has, over the years, run many vital, important and progressive campaigns that help to shift the world in the right direction. In choosing to mobilize its network to criticize a Chinese city causing a fraction of the harm of the western meat industry it does itself a disservice. Avaaz - take down the campaign, apologise to the Chinese and turn your important attentions to the Western industrial food system which is destroying our planet as well as systematically torturing billions of animals. ---- Things we can do now:

Please forward this video to anyone that eats factory-farmed pork: https://youtu.be/WbvR85pQltc