Currently in central London (Euston Square)  5 anti HS2 protestors have closed themselves inside an underground tunnel trying to prevent HS2 from proceeding with their intended plans and in those of cutting down another 20 and more trees in the well-known square of Euston Square. Among them is 18-year-old Blue Sandford tagged by The Sunday Times as The Greta Thunberg of England ,who has been on school strike for a year and a half to draw attention to the climate emergency.

This short film shows the destruction that has occurred in just one of many areas following the construction of the HS2 (the new British high-speed line) which received the green light from the British government. This construction of the railway lines has already destroyed and will continue to destroy not only the lives of the people residing in those areas, but also irreplaceable ecosystems that will be permanently damaged. This film is the story of just one of the many people who have had to endure the suffering inflicted on her by HS2, who forcibly took her land and destroyed one of the most beautiful woods in England.

Penny McGregor moved to her dad’s farm in 1976 when she was a baby. Soon after, her Dad bought part of the South Cubbington wood that borders their fields when the forestry commission put it up for sale, fearing it might be bought and destroyed. The wood is on a hill with amazing views. For over 40 years the locals have enjoyed walking through those woods and are widely appreciated as a lovely place to relax and exercise especially in spring among the beautiful anenomas and bluebells.

Ten years ago Penny and her family were told that a new high-speed railroad (HS2) would cut through the beautiful, unspoiled valley right in the middle of the woods. Being an ancient wood, the family and other families in the area did everything they could to stop the HS2 plan, but nothing worked. They also by not tunnelling under the hill HS2 saved money. Then in 2019 the fences went up around the woods and protesters erected a camp in the area stopping the felling until they were evicted in March 2020. 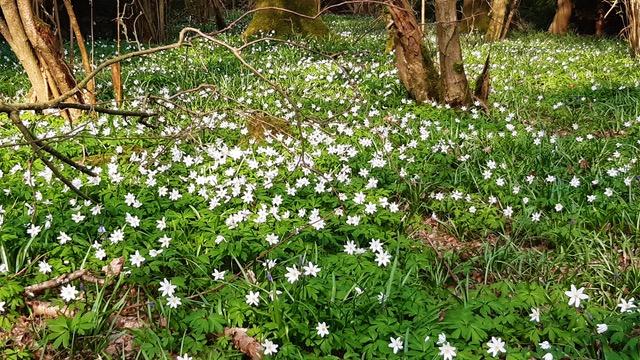 They thought the pandemic would stop the project, but in Warwickshire they accelerated work instead, and in 2020 we saw centuries-old woodland and plenty of trees, especially mature oaks cut along roads and farmland. In that first lockdown in March, people particularly benefited from nature, helping people feel better during the pandemic, but here the locals witnessed the daily felling of beautiful trees in the nesting season in Broadwells,Crackley, Offchurch and other nearby woods.

Ancient woodland soil has been moved to nearby farmland, but this translocation process is a huge experiment that scientists say will not work. This is how the government makes greenwash by flaunting green credentials while doing something permanent and extremely destructive. They have planted saplings along the line, but that in no way replaces all the mature trees they have and continue to cut back in 2021.

Penny was at home with her father and they were both taking care of her sick mother in the few years before the forest clearing. Those were really tough years, but she could never have imagined what would happen in 2020 with the pandemic along with deforestation and land degradation here and around the world. 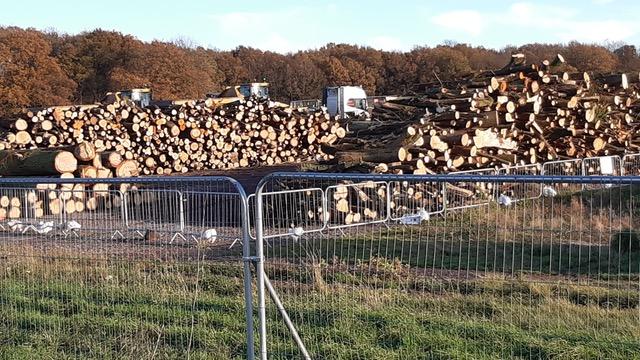 HS2 forcibly purchased 3.3 hectares of South Cubbington woodland and cut down most of the trees within that space, leaving 1.5 hectares of woodland spread out either side of the line some trees still stand .

Penny and her family have not received an appraisal of the expropriated woods or money from HS2 Ltd. They have not communicated with her and her family at all regarding this. The arrogance that comes from the forced purchase is felt by those who live on the route of the new railway line.

They took arable land for the mitigation areas. Wooded land and some coppices have been moved to Penny fields near the woods. This is an experiment and all they can offer to replace the ancient woodland ecosystem that has been demolished. An important fact in this is that Penny and her family practice regenerative agriculture on their farmland and therefore do not plow. They've been storing the carbon in the soil that is for years. 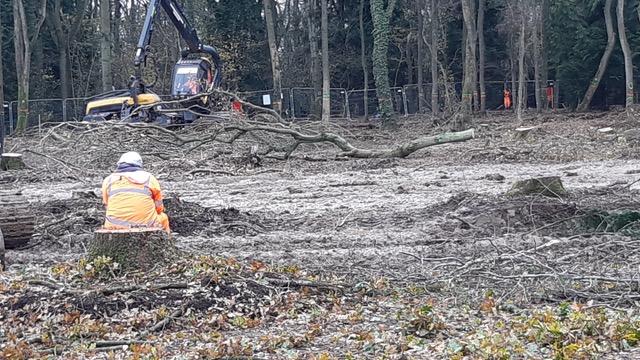 The Battle of Euston